[Proudhon took a beating when he challenged her. What chance would a mere abstract inconsistency have against the power of Jenny P. d’Hericourt? This is enough fun to merit a full cross-post from Black and Red Feminist History. And d’Hericourt continues to rise in my list of sharp and entertaining radical writers.] 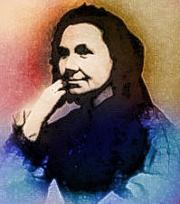 MORALITY ACCORDING TO THE SEXES
BY JENNY P. D’HERICOURT
Dear reader, let us for a moment listen to a conversation between wife and husband:
Wife—“Men continue to be absurd, and to affirm the contrary of facts. The New York Nation writes thus:” (She reads.)
Society refuses to treat men’s licentiousness with the same severity as women’s, because the consequences to the family, to children, and to property are less serious.
Husband.—“But that is true, wife, and,” (He reads.)
A woman must be taught to take care of her honor, and to bear unsupported the loss of it.
Wife.—“Then, if I can prove that the consequences of men’s licentiousness are more ‘serious to the family, to children and to property’ than women’s, you will feel yourself obliged to treat it more severely?”
Husband.—“You cannot prove that.”
Wife.—“I will try. If a wife is untrue to her husband, she does not spend her money for her paramour, but the contrary. But an unfaithful husband has sometimes two households, and always spends much for his paramour. Men’s licentiousness, therefore, has more serious consequences than women’s relatively to the family property. This is a fact, not a mere affirmation.
“An untrue wife can introduce illegitimate heirs in the family. These children are taken care of, loved, and no stain is on them. An untrue husband introduces illegitimate heirs in another family, or they are borne to him by an unmarried woman. If he takes care of them, he robs his wife and legitimate children, if he abandon them, they swell the population of prisons and brothels. Men’s licentiousness, therefore, in this respect, has more serious consequences to children than women’s.
“An untrue wife carefully conceals her bad conduct. She loves her children, is mild and amiable with her husband; no trouble is in the family. Too often an untrue husband is cold, rough, angry, does not conceal his behavior, and gives bad examples to his children; he dissolves the family physically and morally.
“Through men’s licentiousness women are wholly corrupted and enfeebled; first, mentally, by seduction and prostitution; second, physically, though the awful disease which is the fruit of license, and which, transmitted to children, tends to the destruction of the race. Idiocy, dumbness, deafness, blindness, scrofula, are the physical gifts of a father’s licentiousness to his children. And moral tendencies and weakness of self-control are his gifts in a moral point of view. Never can a serpent be the father of a dove, my dear sir; never can a thorn produce roses; the daughters of an impure man cannot have chaste tendencies. So, as to the health and dignity of our species, you see that men’s licentiousness has pretty serious consequences.
“And if your daughter, taking her standpoint on your utilitarian ground, will follow your masculine rule, what can you object? The beauty of chastity? But if it is beautiful in a woman, why not in a man? The necessity to control her appetites and instincts? ‘But, father,’ may she not ask, ‘why have you not controlled yours? Why have you given me those awful tendencies and your weakness of controlling them?’ The fear to be despised? She is smart enough to dissemble. And, after all what matters to her the opinions of foolish people, blaming in her, what they admit and tolerate in her brother? Girls compare and reason, to-day, you know, my dear husband. The risk to become a mother? But the advertising pages of any masculine journal will indicate thousands of remedies against this risk, and besides, hundreds of physicians are ready to help her avoid it. her life and health are endangered by these criminal practices? But why have you not the same uneasiness about the health of her brother, who not only endangers his life and health, but makes a provision by which disease and vice may be entailed on his future children?
“On you own utilitarian ground, my dear husband, you can perceive that it is easy to best you in argument. In the point of view of family, children, race and property, facts prove that men’s licentiousness has consequences more serious than women’s, and all the sophistry invented by your immense selfishness, you blind ignorance of natural laws, your incredible weakness in self-control cannot transform your affirmations to facts and rules. Simple good sense says, as women cannot be pure unless men are so, the rule of morality is the same for the two sexes.
As when a woman sins a man sins too, both are equally guilty, and the public opinion which makes a distinction between their culpability is absurd and despicable. Besides it has the ferocity of the tiger and the injustice of the devil, if it condemn the weak, led astray by the strong seducer and suborner. Such a public opinion gives nausea to a just and reasonable soul, and makes one ashamed to be shut up in a body, belonging to a species of animal so cruel and so illogical.
Chicago, June 21 1869.
Source: The Agitator, 1, 16 (June 26, 1869) 1.

A socialist-feminist document from 1849

MADAME JENNY P. d’HERICOURT Dear Agitator: You ask me the biography of Madame Jenny P. d’Hericourt! I consent only to draw the great lines of her eventful life, those which can be interesting to those […]

The Black and Red Feminism zine has been reborn as La Frondeuse [The Troublemaker, or The Anti-Authoritarian.] The name is borrowed from one of Séverine’s collections. Issue 3 features works by Louise Michel, Paule Mink […]